Once a Change has been assessed and accepted it may require a prescribed business process to be followed which may involve approvals, scheduling, and tasks. All of this can be orchestrated using the Business Process Engine. The complexity of the underlying change process can be shielded from the change users, and instead a graphical Head's Up Display can represent the Processes stages, tasks, authorisations, and milestones.

Changes can include multiple approval stages in a single underlying Change Process. Approval stages can be configured using the Business Process Designer and the Authorisation node.

Approvers will be notified by Hornbill Notifications which they will receive through their web user app, and or via the native Hornbill iOS or Android app. If the approver has a minimum of the Change Management User Role they will be able to view the Change and make a decision. If they only have the Collaboration Role they will be able to view the Authorisation task and supporting details and make their decision by choosing from one of the two available outcomes again through the web user app, or native mobile apps.

Once a Change is scheduled it will appear on the Forward Schedule of Change calendar.

In Service Manager if you have at least the Change Calendar Viewer role, you can review scheduled change in the change calendar by:-

Change implementation tasks can be configured using the business process engine. Tasks can be assigned to named users, roles, and variables (for example Request Owner). Implementation tasks can include review activity once the Change has been deployed. Review activity can be used to identify the Effect of Change identifying and recording any Incidents or Problems which have been raised as a result of the Change. 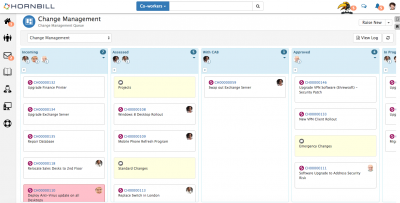