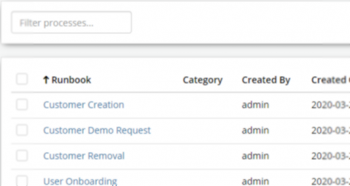 Searches process for a Set Value 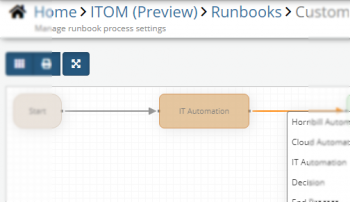 One significant difference with the BPM, as used within Applications such as Service Manager, is the definition of input and output parameters. Runbook process can be called via an applications BPM, using a Runbook Process node where the process can set and use the parameters the same as for system nodes.

The following nodes are available for use within the Runbook processes and function mostly identically to how they work within the BPM Engine except for the parameter "Auto" and suspend features. We recommended that all parameters be manually entered or populated using variables and not The "Auto" feature, which relies on executing within the context of an application. Any nodes that can suspend the process will not be available for use within a Runbook, as they should be able to execute with no user interaction seamlessly.

Invoke Actions within a Hornbill Application or Core Feature

Interact with third-party systems via a Hornbill iBridge automation

Used to control the flow of a process based on the outcome of the previous node(s), with more complex logic possible via custom expressions using process variables. Each decision node allows for a maximum of three outcomes, where more than this is required, it is also possible to chain decision nodes with the use of a No Match outcome.

Successfully terminate the process, allowing for values to be assigned, manually or via variables, to the output parameters as defined in the Runbook Processes settings.

Abandons the process and sets the status to "Failed", allowing for a message to be manually supplied or sourced via a variable.

Allows a process stage to invoke more than one stream of actions and for these to run in parallel. Adding this node will enable multiple process streams to be defined, and these will run independently until brought back together by the Finish Parallel Processing node. Examples of this would be a requirement for assigning tasks to different teams, but there is no dependency or need to complete one before the other can be created and invoked in parallel.

Use this node to bring together and finish the individual process lines initiated from a Start Parallel Processing node.

Currently, the Hornbill Automation type "Suspend" is currently available and will be deprecated from use in a future release of Runbooks and should therefore NOT be used. 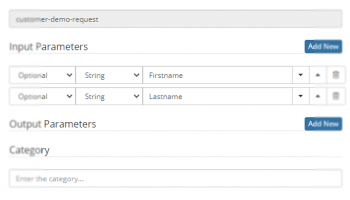 Parameters which can be used throughout the process

Parameters which will be passed on to the calling process

Access can be granted based on Role, User or Group

IF the "Access Granted To" is set, the system will limit then the ability to run this particular Runbook to either specific users and those users who are members of the configured Groups