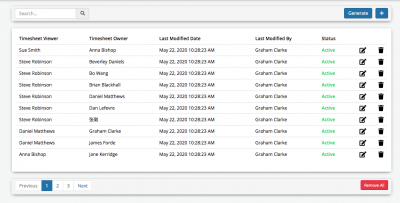 The list will be pre-populated with your existing mappings, which is built dynamically based on the following:

This option provides you with the ability to automatically generate timesheet visibility based on the following logic:

Would you like to remove all existing Timesheet Visibility Mappings?

Once a mapping has been created manually it will appear in the Timesheet visibility table.

From the mapping list, you can perform the following actions