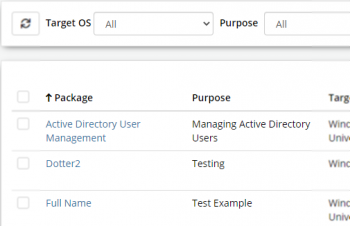 A Package consists of a single Package Info file and with additional resource files where required. The info file contains all the details regarding operations and all parameters that may be necessary. Although it is possible to manually create a Package, a form-based editor is provided to simplify the process. An interface is also provided to facilitate the uploading and organisation of resources that may be required to facilitate operations. These resources may be scripts, executables or other required files. An interface is also provided to allow for various file types to be created via the browser.

Operations provide the package actions, which may execute a single command, execute a script or install/uninstall software. In general, it is recommended that each operation perform a single task. An Operation can be defined by clicking on the Add Operation button.