To add a custom expression to a branch node you must first connect the decision node to the next node in the flow. 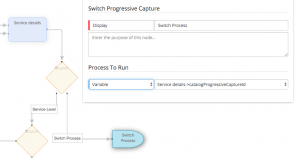 On the Switch Capture node, you can configure this to link to a specific new process, or use a Variable to link to the progressive capture linked to the request catalog item which has been chosen. In this example, this is what we will do and the Variable to use would be Service details -> catalogProgressiveCaptureId