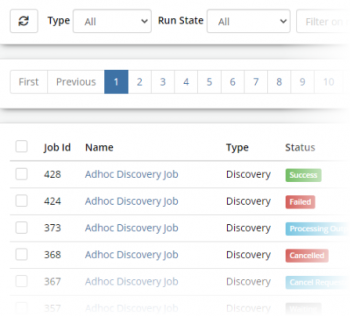 Enables all selected Deferred Jobs to be Activated for processing

Where it is required for a Job to be Cancelled, for example; maybe the job has stalled or is taking a large amount of time and resources. Cancelling a Job will gracefully terminate all initial process(es) spawned by the job, on the target machine.

Once a Job has been started all process Id's are visible within the Job's Monitor. The following shows that a job was started using the "Run As" feature, and thus created three process IDs, The Package Execution process (EspSisExec.exe), The Elevated "Run As" Package Execution Process (EspSisExecRunAs.exe) and finally the package payload (in this example Dotter.exe). 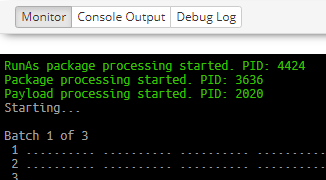 The running process can also be identified using the above PIDs, on the target device by listing the device process list. On a Windows device, this can be achieved via the Task Manager or via the command line using tasklist.exe as shown below:

Clicking the Cancel button will be acknowledged, and the status set to "Cancelling" and once the processes are terminated the Jobs status will be set to Cancelled.

In most cases just Cancelling a job should suffice, however in cases where this option fails, an Abort option is available to force the termination, accessed via the Job's Details Action Buttons.

A Job can only be deleted while its status is not one of the "Active" group, by the use of the delete button, after which the Job will be removed from the Job Queue list and will no longer be accessible.